Check out these review highlights! 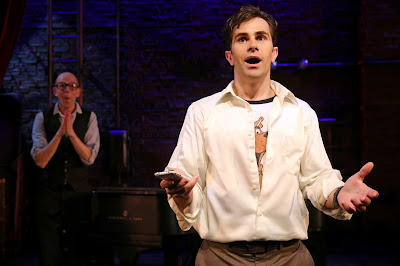 “An ingenious miniature musical in the form of a snazzy vaudevillian double-act. The authors and the director deploy minimal stage resources to maximum effect. With just two actors, a piano and a prop or two, the show spins out a curlicued comic mystery story animated by funny, deftly turned songs!” -The New York Times (Charles Isherwood)

“Four stars! A zany musical whodunit... it wins you over with droll writing and winsome performances!” -Time Out New York

“A bawdy-yet-intelligent send-up of the murder-mystery genre... the self-aware humor of the book makes the evening feel like a live-action Clue-themed episode of The Simpsons or Family Guy” –TheatreMania

“It’s a noir-tinged, slapsticky detective story elevated to heights of delicious farce by its clever authorial and directorial conceits… who’d have guessed that murder could be so much fun?” –The New York Observer

“This fluffy midsummer crowd-pleaser is pure confection... watching this sprightly caper felt like polishing off a whole plate of ice cream for dinner.” –The Village Voice

“Somehow manages to pack in all of the entertainment value of a mega Broadway musical... you’ll undoubtedly be eager to recount the experience of ‘Murder for Two’ to your friends!” -Metro

“Kinosian’s insinuatingly catchy tunes and Blair’s deft, at times Sondheimian, lyrics convey fun as readily as facts: Marcus’s ‘Protocol Says,’ about the rules of police work, is a blisteringly fun opener; ‘He Needs a Partner,’ a sweet ode sung by Whitney’s niece Steph who takes a strong liking to Marcus and his work; and ‘Process of Elimination’ is a fast-paced parade through the final stages of deduction!” -Talkin’ Broadway

“Get out your sweat rags, murder mystery buffs! ‘Murder For Two’, the new whodunit musical, is 90 minutes of non-stop wackiness and killer suspense!” -Curtain Up 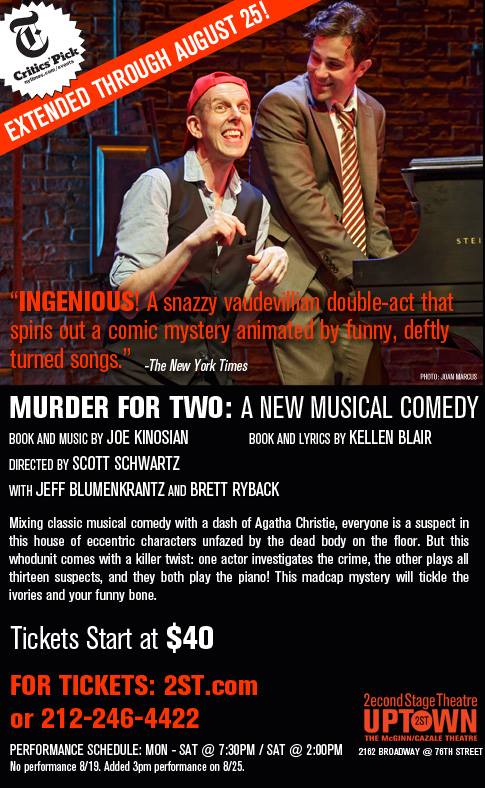