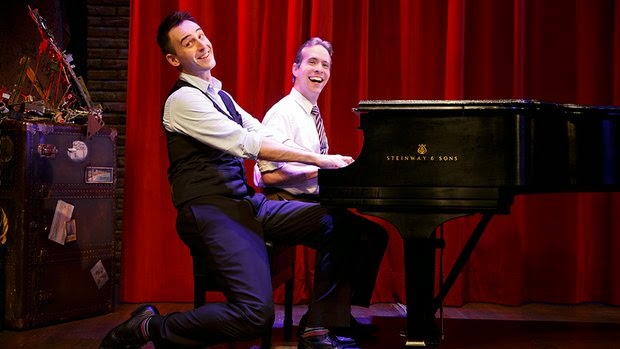 A musical comedy that crams multiple characters and settings and songs into a streamlined two-man production demands a similarly pithy, stripped-down mission statement.

So here’s one that’s made to fit “Murder for Two,” which hits the Old Globe Theatre next week: “What if the Marx Brothers performed an Agatha Christie play?”

Those are the words of “Murder for Two” co-writer/lyricist Kellen Blair, who’s speaking of the conceptual breakthrough he and composer and fellow writer Joe Kinosian had when they were brainstorming ideas for the show.

What developed was a kind of musical deconstruction of the detective genre, with one actor playing the gumshoe and the other playing all the myriad suspects. (And both playing the piano.)
“Murder” premiered to acclaim in Chicago in 2011, then had off-Broadway runs at two separate theaters in 2013. (Old Globe artistic director Barry Edelstein recalls “seeing it in New York and smiling until my face hurt.”)