Announcing the
Kinosian and Blair
Raw and Edgy
Ticket (and other stuff) Giveaway
Photo Contest! 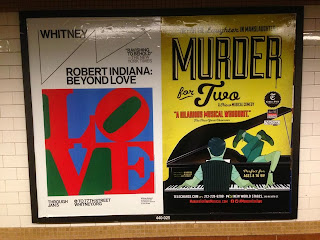 Here’s the sitch: now that “Murder For Two” has transferred from a non-profit production to a very-profit production, we’re worried that our reputation as raw and edgy musical theatre writers may be in jeopardy. But listen, we’re still the same untamed bad boys that brought you songs like The Crush (sheet music available at our online store). And we’re here to prove it to you, with this ironically self-promotional ticket giveaway.

Apparently there are “Murder For Two” posters all over the city and quite frankly we’re disgusted by the blatant commercialism of it all. But you can’t take down the man until you raise awareness about the problem. So grab your smart phones and start taking photos of yourself in front of these posters (they can be found in subway stations, on phone kiosks, etc). Make a finger-gun with one hand and a big thumbs up with the other hand. The message will be loud and clear: “we want to shoot commercialism in the face… we give that idea a big thumbs up!”


The person who posts the most photos in front of different posters by Monday, November 25th (tagging us on twitter, of course), will win the following assortment of edgy prizes:

2. An original 5 second song written especially for you by Kinosian and Blair. And we promise, the recording quality will be so low that you’ll feel like you’re getting an intimate glimpse into our raw process! An infinity dollar value.

3. A guest appearance on the wildly popular musical theatre podcast Musical Theatre Today (hosted by writers Touch and Fondleman… and we use the term “writers” loosely). Check them out here. Value unknown. 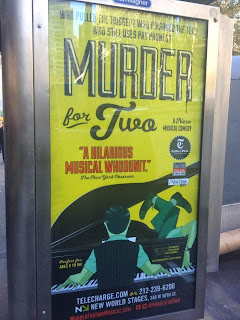 Rule 1 - there are no rules. Kinosian and Blair aren’t about limitations as determined by “the man”.

Rule 2 - rules are made to be broken, including rule 1.* Because sometimes we actually do need rules in life. And this is one of those times.

Rule 3 - You must tag both @JoeAndKellen and @MurderFor2 on twitter for the photo to count!

Rule 4 - You don't necessarily have to do the finger-gun and thumbs up, but you yourself must indeed be present in the photo!

Rule 5 - It must be visually clear in the photos that you’re not just shooting the same poster over and over again. Try to get some of the background (a street number, a subway stop, some intricate graffiti, etc) in there so we know your photos were taken in different locations.

Rule 7 - In the event of a tie, we will throw darts at a wall. That usually clears our heads and should allow us to think of some sort of tie-breaker.

*No rule other than “rule 1” is meant to be broken.